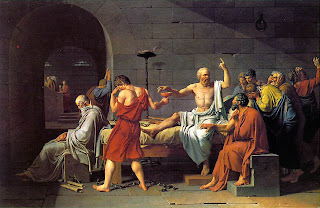 I'm not a particularly good philosopher. At least I wouldn't claim to be. But there are days standing in front of 40 young adults when I feel like the father of philosophy himself. Of course, it is not that I am like him in his reputation or greatness. Rather I am like Socrates in front of an Athenian jury on the day of his trial.
I say relatively absurd things, things that go right against common sense (some of them are things I even believe), things that make my students relatively unhappy. I try to convince them that they don't really know what they think they do and that, although it is of the greatest import that they give reasons for their beliefs—something that they are barely convinced of themselves—their beliefs are largely baseless. Then, like Socrates himself, I tell them that though they are unhappy, I am really making them happy.
Today, in the midst of an explanation of why Lord Russell thought that we were, after all, justified in thinking that the material world exists after two weeks of force-feeding them skepticism, one of the students muttered, "Jesus". I had to reply that He wouldn't be able to help them, at least in understanding Russell; they just didn't get along after Russell wrote Why I Am Not a Christian.
One of these days my coffee is going to taste of Hemlock.
Posted by Tyler Hower at 6:08 PM

The type of feedback is relative to the type of school you are at, I imagine.

You might think so, but I've taught at three pretty different places and the reactions are pretty similar. For an interesting take on the phenomenon, look at: http://www.nytimes.com/2008/02/14/books/14dumb.html