Some passing thoughts on Nietzsche, velvet ropes, and marriage 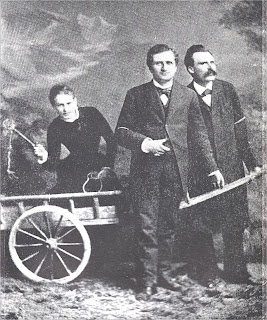 Ressentiment is a characteristic of all “slave moralities,” according to Nietzsche’s picture in Genealogy of Morals. Roughly, ressentiment is an emotion of imagined revenge felt and nurtured by the underclass against those who do or are felt to oppress them. Because part of what it is to be in the underclass is to be powerless, those at the bottom of society have no real way to lash out  at those above them and so they imagine a punishment, whether that is the inevitable revolution or karma or the punishments of hell. “Though we may be downtrodden now, you will get yours in the days or world to come,” the oppressed mutter under their breath and it makes them feel better, even as it poisons the world for them.
Nietzsche gathers many examples of ressentiment in action, but one that has always stuck with me is drawn from Aquinas. In the Supplement to the Summa (question 94), Aquinas considers the ways in which those in Heaven will rejoice in their knowledge that others will be damned. Nietzsche is, perhaps, too harsh on this passage—Christianity is his bête noire—and Aquinas does say that the saved will not rejoice in the punishment of others as such, but only in knowing what could have happened to them but did not and in seeing Divine justice done.
That is, at least from the modern perspective, fairly dark stuff and Nietzsche uses it to argue that the religion of Love is actually a religion of Hate. I’m not endorsing dear Friedrich’s conclusions, but he points out something interesting here about traditional Christian conceptions of Hell and Heaven. Part of the joy of Heaven consists—even if it is indirectly so—in the fact that there are others in Hell, others who did not get in and have to suffer. You see this even today among those conservative Christians—I know mostly of Catholics—who get extremely angry when one of their co-religionists suggests that Hell will be not empty but very sparsely populated.
I think of this as a the velvet-rope theory of Heaven: it’s really only valuable if others can’t have it. If you take away its exclusivity, it isn't worth much. (Someone of a more biblical or theological bent might want to think through this is in the context of the Parable of the Laborers in the Vineyard.)
What, you might ask, has me thinking about this? Debates about marriage, I might reply.
It seems quite likely to me that same-sex marriage has a short future in the United States, at least in any sense stronger than just a license with no attendant rights or responsibilities. There are many arguments against state recognition of same-sex marriage and they come from different backgrounds. Some are full-throated religious arguments. Some rely heavily on tradition. Some rely on old-fashioned natural law. Many rely on the weird hybrid theory that is the new natural law. But many of them have as at least part of their content, a claim that the recognition—in civil law alone—is a harm to the institution of marriage and their own marriages. (See, for instance, link, but there are many more examples.)
Some of these last sort of arguments are worth thinking through even if we disagree with them, but very many of them amount to little more than a velvet-rope theory of marriage: if you let those people in, it will cheapen mine. We saw a version of this, of course, in arguments against miscegenation. Even if some opponents are right that same-sex marriage decreases the attractiveness of traditional marriage, it’s important to ask why that is.