So, Kanye West has a song yclept "Runaway". It is a song that he has performed on Saturday Night Live and on the VMAs, both times wearing a red suit, numerous gold chains and backed by women in tutus who act less like backing dancers than those annoying "statues" that have become ubiquitous at every street festival since 1995. Of course, since it is a sung piece and not a rap, he is autotuned in a way that can only make one think of Cher or the very worst musical number on television. And, as should be obvious, he always seems quite satisfied with himself during his performances.
My question is simple: When he sings, in this song, "toast for the douchebags, toast for the assholes, toast for the scumbags" is he smart enough or self-aware enough to be ironic, or does he really not know he's singing about himself?
Posted by Tyler Hower at 12:58 AM 2 comments:

In the last couple of weeks, a friend of mine did something objectively irrational—one might say stupid—something that put his life at risk. But, as we discussed it briefly, it became apparent that he did what he did not in a drug- or alcohol-induced haze but in another sort of haze, that sort of place in which one loses oneself in passion.
In our society, we value passion, we value devotion, we value going all in. And, although we do not put it quite this way, there is a long tradition in many of the cultures that feed into our own, of valuing losing oneself, whether in meditation in the Hindu and Buddhist traditions, in a mystical union with or experience of the Godhead in mystical traditions in all the Abrahamic religions, becoming one with ones actions in varieties of Zen and Taoist thought, losing oneself in action in literary figures (e.g., Hans Castorp at the end of The Magic Mountain) and so on.
And, while I am cautious—probably overcautious—and was raised to mistrust this kind of loss of control and rationality, there is something admirable about diving so deeply, even when risks are involved, about embracing the Dionysian and letting Apollo be damned.
Of course, I'll remain on the Apollonian side, but I can see the appeal of the other way.
Posted by Tyler Hower at 7:55 PM 2 comments:

This morning, I woke up to one of those emails telling me that a couple that we both know is having problems and one of them has moved out of the house they bought about a year ago. Whenever something like this happens, I have an initial thought: I'm not sure how they ever worked together as a couple. It's important to say that this is always my reaction. And, because I know that this is always the way that I react, I immediately remember that, from the outside, our relationship has to be pretty inexplicable.
I think that this is usually the case with any relationship. We've been together for just over fourteen years now—and that's a lot in gay years, still—but for more than a decade, I have heard people say to my partner that he could do better and tell me that I'm too good for him and, occasionally, the same sort of thing to me. Of course, some of those have been cases where people were interested in one or the other of us or people were just being generally destructive. But, many of them were saying what they thought: that our relationship just didn't make sense. And, while I am scrupulous not to do the same sort of thing, it is definitely the case that while I can tell that people do work well together and that they make each other happy and even care about one another, I often am unable to make sense of the mechanics, given what I know about the people involved.
Hell, sometimes I don't understand how the two of us work together. So, maybe it just is a mystery how any two people ever enter into any sort of relationship. Forster wanted us only to connect; how do we do that?
Posted by Tyler Hower at 6:13 PM 3 comments:

The worst thing about getting older

Besides approaching average life expectancy for the beginning of the twentieth century or finally being old enough to be the father to many of my students, the worst part of getting older is having multiple friends and colleagues with serious illness and seeing people I think of as being part of my cohort—and younger—die. I lost my father-in-law just shy of two years ago, two friends of mine—both younger—that I met when I used to bartend in the last year and a half, a friend from high school recently went into remission, a colleague is battling a mysterious case of wasting, a colleague of my partner's just had a lumpectomy with the removal of twenty-five lymph nodes, another colleague of his lost his wife, the women who takes our dog once a week has breast and ovarian cancer and the list continues.
I'm barely middle-aged and, yet, I realize every day more and more just how close death is to us all the time.
Memento homo, quia pulvis es, et in pulverem reverteris.
Posted by Tyler Hower at 9:42 PM 1 comment:

So, in many ways this week's classes, because I am longing for break and haven't had a real one in a pretty long time, have been a hard slog. But, today, a student saw a connection between Kant's distinction between the phenomenal and noumenal worlds and Hindu metaphysics, a connection that I had never directly mentioned in class—is it one that I had noticed in those terms?—in the middle of a review section. That's some kind of achievement.
Posted by Tyler Hower at 9:58 PM No comments: 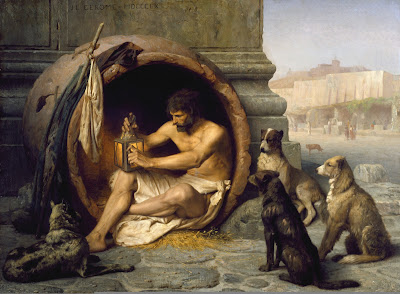 It is rarely my intention here to say anything original. This is for two reasons: I am not sure that I have many original thoughts that would be worth sharing and much of what is thought of as original—especially in philosophy where, for instance, that great turning point of modern philosophy, Descartes' Cogito in a philosophy that is supposed to start from nothing, is really just a reiteration of a point Augustine made more than a millennium earlier in his Confessions—is really just someone else's idea the source of which is forgotten.
So, for quite a while, I have been thinking about a theme which seems to recur in numerous philosophical and religious contexts throughout quite a bit of human history, viz., the juxtaposition of the solitary and the communal. Think of the sadhus of Hinduism or the forest monks of Theravada Buddhism, mountain sages of Taoism, Diogenes of Sinope in his tub in the city, John the Baptist in the New Testament, the Desert Fathers of early Egyptian Christianity, the medieval anchorites living in hermitages or walled into parish churches, the startsy of Russian Orthodoxy, the Carthusians living as hermits in a community, Wittgenstein in his hut in Norway and his cottage in Ireland and in both cases engaged in extensive correspondence.
In each of these cases—and each is thought of as an example of wisdom in the tradition from which it comes—we see a person or persons who both ache for and/or embrace solitude and, at the very same time, are engaged in deeply social behavior.
This, I think, suggests something important and central to the human condition. We are social beings, as Aristotle noted in the Ethics, but we also recognize ourselves as apart. As many psychologists and philosophers now think, one of the thing that distinguishes us from (most of the) other animals is that we have a theory of mind. That is, we are able to see that others also have perspectives on the world, as we do. But, this also implies that we realize that there are other perspectives on us. This, in part is why, unlike almost all the other animals, we can recognize ourselves in mirrors; we realize that there are other perspectives than our own and those perspectives are also perspectives on us. But, this means that we have a unique perspective, one that is unsharable.
We are, at one and the same time, naturally social—to leave society is, all too often, in Aristotle's terms, to become a beast—and prevented from full social sharing. We are called to and barred from community by our natures. And this, I think, makes human life a paradox. One that is insoluble except through embracing it as so many sages have attempted to do. Most of us, I fear, are unwilling to do just this.
Posted by Tyler Hower at 9:16 PM No comments:

For all their value at the graduate level, in which one often needs a few weeks just to get familiar with a topic before even being close to a position to think about a paper, semesters are generally horrible at the undergraduate level. At week twelve—I think that's where I am now—I have discussed as much about certain topics as either I can stand or—much more obviously—my students can. Of course, the autumn is especially bad with its dearth of breaks and its bunching of the one big break at the end.
There are things that can seem full of wonder in week one that by week nine or ten have lost their gloss except for those who are very committed. And, while I am very committed to all sorts of issues in, for instance, the debate between internalists and externalists about content, it can be much to expect students, especially those whose interests lie in continental philosophy—as most of mine do—or who have no general interest in philosophy at all.
Not just for them, but for me, the break cannot come soon enough.
Posted by Tyler Hower at 1:15 PM 2 comments: