Our President and the Second Coming

In his infinite wisdom, and his seemingly boundless indebtedness to the energy interests, President Bush, through his Department of the Interior has decided to enshrine in law the practice of removing mountaintops, removing the coal that was in them and filling in the valleys next to the (former) mountains with the remaining debris. So, someday I will be able to tell my students (and my nephews and nieces) that the quarter of my ancestors who were Appalachian hill people lived in what were, once upon a time, actual hills.
At least, once we have no more mountains we will have the coal--oh, wait, we will have burned it; so, we will have at least the warmer environment that coal-burning seems to be giving us.
But, since the LORD, when he returns is supposed to make the roads straight, flatten the mountains and fill in the valleys--I guess it seems better theologically than aesthetically--maybe Bush is just working to bring about the Second Coming, by doing some of Christ's work for Him.
Posted by Tyler Hower at 10:01 PM 3 comments:

A new look for fall 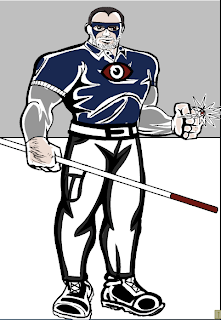 While screwing around on the internet today, I designed a superhero identity for myself. I'm thinking that it might work for a teaching outfit this fall; and, with a jaunty cap and coat, for walking about, as well.
Posted by Tyler Hower at 6:27 PM 4 comments:

Why parents can be so embarrassing

Watching an acquaintance try to control his mom's behavior this weekend made me think a little bit about why we can be so easily embarrassed when our parents mix with our friends, especially when we live far away from our hometowns and the majority of those who know us now didn't know us as children or adolescents.
But then it made so much sense. It isn't just the ways that parents can act silly and do things that we don't want to think of them doing. For instance, a man in his mid-twenties might not want to see how his mom acts when she's drunk--because to him that's his mom, not a complete person with all her faults. And he might not want to watch his dad hit on women half his age, for the same reason. And, a man in his mid-thirties (like me) might blush a little when his mom decides to tell stories about what he was like as a child or what he thought "you hurt my feelings" meant when he was four. You mean my feelings aren't in my butt?
The real thing that embarrasses us, I think, is the way that they uncover our inauthenticity. The majority of people I spend time with, who know me, didn't know me when I was a child or a teenager or even before I was thirty. That means that I have a had a fairly free hand in creating a "me" for them to know. I get to be the author of my own identity, as if I were some sort of autonomous Ayn Rand character. But, when Mom shows up, she tells the lie. Because, after all, there is another "me", one that existed before, one that she knows, one that she had a hand in creating--not just biologically, but socially and psychologically--and that can be a lot like being stripped naked in front of strangers, since it really is stripping off the mask that I have created for myself. So that's why parents shame us; and it's also why it's so good to be embarrassed by them. They remind us who we really are, at least what parts of us are.
Posted by Tyler Hower at 10:36 PM 5 comments:

The oppurtunism of the Fox

While trying to make my obliques rockhard today at the gym, I watched a little bit of that bastion of journalistic integrity, The Fox News Network. They were reporting on the political side of the Minneapolis bridge collapse. The angle being pursued was to blame politicians for not directing more money towards infrastructure upkeep and instead focussing on new projects, for which they both garner credit in their home districts or states and, if they have the political acumen of Robert Byrd, can also name after themselves. If you've never had the pleasure of traveling through West Virginia--and it is truly one of the densest collections of natural beauty there is--you've also never had the pleasure of listing all of the things dear Senator Byrd has named after him. Of course, there is little glory in appropriating more money for upkeep, so it often goes by the wayside.
I heartily agree with Fox's analysis--and I just threw up a little. Having spent more than a decade on university campuses, I have watched as blackboards cannot be replaced, as classrooms and offices are taken away, even as another Dr and Mrs Hiram P Lucre Center for the Study of MIcronesian Opera at the Mary X O'Coin Institute of Rather Irrelevant Matters in the F J Mercantile Building. No one ever wants to give money for mundane matters and everyone likes to see his name on a wall or stationery or a building. That's human nature, I suppose.
But Fox misses the irony that for 6.5 years we have had an administration beholden to the "starve the beast" mentality of cutting taxes, even during a time of war--for while it is perfectly reasonable to ask soldiers to sacrifice their lives for us it is too much to ask taxpayers to pay for a war as it is fought, much better to put it on credit to be paid for by the next generation--and only instituting policies as unfunded mandates to be paid for by the states, as they themselves are pushed to cut taxes by the same political pundits who have cut them at the federal level. Levies fail and bridges break--by some reports as many as 25% of the highway bridges in the US are in serious need of repair--when there's no money to fix them. And there's no money to fix them when our government wants to make sure that the citizens (or some of them) get to keep as much of their money as possible. When you starve the beast, sometimes it won't do the work you wanted it for.
For now, we should pray for those lost in Minneapolis and their families and friends. And, we should work for a wiser electorate and government that at least realizes the costs of cutting the government in all its functions.
Posted by Tyler Hower at 4:18 PM No comments: