That's just semantics! (But isn't it all?)

Earlier today I was involved in several discussions about whether it was best to describe this as "gay bashing," or something else. There's no value in rehashing all the issues here, but I was arguing that it is bad pragmatically and ethically to characterize all anti-homosexual opinion or statements as "gay bashing," in much the same way that denying—as most Christians do—that Muslims will go to Heaven is "Muslim bashing." (I know the issues are not exactly parallel.) And, I think that doing this denigrates the experiences of those who have been bashed. Besides, I think taking the mantle of victimhood is to fight from a place of weakness.

One of the most important things that these discussions reminded me of was that pace Plato, philosophical training does not prepare one for political discussions, let alone political power. At least in the system we have, the practice of making distinctions—and that's what philosophers do—is not all that appreciated (or, probably, helpful).

But, the other thing that came back to me was that when distinctions are made, the most common move is to say, "That's just semantics." I think we must learn this move from some well-meaning high school teacher who wants to teach us that there are real distinctions and then there are ones that are merely semantic. You know, ones that are just playing around with words. There are facts and there are words. There is a world and there is a representation of it.

Apart from the fact that this claim falls flat from those who have just been arguing that it is very important that legal same-sex relationships be termed "marriage"—isn't that just semantics, too—there is a deeper, almost existential problem with this.

One might have all sorts of things to say about human nature, but almost anyone has to admit that one of the most amazing things about us, if it is not the defining characteristic, is that we are semantic beasts. We live in a web of language. As Dan Dennett puts it, we weave narrative selves throughout our lives. We interact with one another through and in terms of language. We understand ourselves through our discussions with others (and with ourselves), through our diaries and journals and blogs. For Christ's sake, we tattoo words on our bodies and engrave them on buildings and put them on our clothes. The Abrahamic religions have God speaking the universe into existence and the first man beginning his career by giving names to all the animals. Christians (following the Stoics) worship the Word of God.

We spend all the time talking and texting and writing and reading and singing words, words, words.

And, alone (?) among the animals, we look for meaning in our lives and in the world. Nietzsche got it right when he said that we were so terrified of a life devoid of meaning that we will take anything, including the Void, as our meaning. We create meaning, we search for meaning, we need meaning. And, we put it into words.

Yes, it's semantics, because it all is.
Posted by Tyler Hower at 4:52 PM No comments:

When two self-radicalized Chechen Muslims in Boston killed three and injured hundreds, many pundits of all stripes, from conservatives to Tea Party-types to New Atheists, immediately moved to condemn Islam and Muslims and Caucasians—in the original sense—and question whether we should be allowing so many Muslims or Caucasians into the country. We hear once again that we live in a world where it is our worldview against theirs.
Today, once again, close to a hundred people were killed and many other hundreds were seriously injured in a factory in Bangladesh, known to management (it seems) to have been unsafe. The workers were called in to work anyway, because the need to produce cheap clothes for the American and European and other markets was taken to outweigh the risks. Though it seems that the factory failed even Bangladesh's safety standards those standards are not enforced. In short, these people were killed by unregulated capitalism. I await a call that we put a stop to such unregulated capitalism. But I suspect I won't hear it.
If the action of a few Muslims colors all members of the faith, why doesn't the action of many more capitalists call into question that faith? And, why do we never think about our involvement in the practices that led to these deaths?
Posted by Tyler Hower at 7:51 PM No comments:

Can I steal what you don't want and won't miss?

I am walking in your garden one day in late spring where I notice a very beautiful camellia. When I see it, I remember your having told me about it in the past: how you had first spotted one like it on a trip to Japan, how you hadn’t been able to get it out of your mind after your return, how you had finally found a nursery stateside that sold the same varietal in the same color, how you had paid an exorbitant amount to have this very bush shipped to your home, how you have cared for it, how proud you are of it. 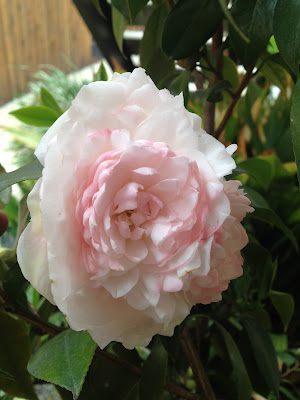 Looking at the plant, I have to admit that it is a very desirable plant. I also notice that it’s covered in new growth. I can tell that you prune it back every year, but you haven’t gotten to it yet this year. So, the new growth that you would normally cut off and discard is still on the plant. Since I know a thing or two about starting plants from cuttings, I get my pocket knife out and cut three pieces off the bush and put them in my jacket pocket. I don’t think to mention it to you.
At home, I am able successfully to start two plants from the cuttings I have taken. Now, without the cost or effort, I have the same bush you have.
Some questions:
Have I harmed you in any way? If so, what is the nature of the harm?
Does it matter that I didn’t ask you?
Would it be different if I waited and took the cuttings from your trash?
Do I owe you anything for the cuttings that you would otherwise have   discarded?
Are the questions different if I instead take a cutting from a public bush? From one in a commercial nursery?
Posted by Tyler Hower at 5:56 PM No comments:

Email ThisBlogThis!Share to TwitterShare to FacebookShare to Pinterest
Labels: ethics

Richard Dawkins has gotten caught suggesting that religious believers have such absurd beliefs that they oughtn't have respectable jobs. Of course, he has replied that it was all a misunderstanding, here.

Posted by Tyler Hower at 2:10 PM No comments: