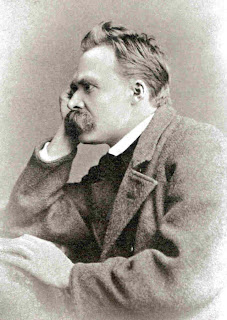 On a number of blogs, particularly those of an entrenched Christian flavor (see, for instance, Faith and Theolobloggy, written by a philosopher who ought to know better), one can learn the contents of Northern Illinois murderer Steven Kazmierczak's package to his former paramour. He sent her money, a cell phone she had wanted, a holster and bullets, a textbook on serial murderers and—wait for it—a copy of Nietzsche's The Antichrist.
Clearly, the argument goes, it is the influence of Nietzsche, a notorious atheist and the original author of "God is dead!" that led to the killing spree. After all, Nietzsche denied that the traditional Judaeo-Christian dichotomy of good and evil was meaningful, looked down on Christian virtues such as pity—among other things, he was suspicious of any emotion that might gather joy out of the suffering of another—and instead celebrated power and the Graeco-Roman conceptions of virtue, as characterized as what a noble man would do. And, moreover, they claim, it is his atheism and the fact that the philosophers who teach this drivel to students are themselves anti-religious, atheistic and, in particular, anti-Christian. Thus, as I told my introductory students today, apparently philosophy has killed again.
A lot could be said about how wrong you have to get Nietzsche to think that his conception of the Übermensch would be a fellow to walk into a classroom and open fire—Nietzsche's views are unpleasant and he has a nasty word to say about almost every group and every individual he has ever met, but serial killing and mass-murder suicides wouldn't really have been on the books for him; his hero was Napoleon and the Renaissance princes, not the purveyors of random killings.
And a lot could be said about the fallacy of false cause in this very argument. For instance, why isn't the textbook about serial killers more relevant to his psychology at the time of the killings? Why is the mere fact that he had a relatively innocuous book and sent it to his girlfriend evidence that there is a causal relation between that and his having opened fire?
And we could talk about how none of the students I have made read selections from The Genealogy of Morals have ever gone on a rampage. Or why people are able to read Genesis and Deuteronomy and Kings and the rest of the historical books of the Bible, in which men are often praised or barely chided for actions that are pretty morally horrendous without taking away from it wholly amoral lessons.
But I am more interested in the implication that philosophers are the real demons here. As I discussed with the much more intelligent and well-spoken fellow across the foyer from me in my office, there are two big things that you might think of philosophy doing. They are not wholly unrelated.
Philosophy can be a handmaiden to other disciplines and projects. Thus, philosophy can serve theology, or it can help us to understand the rational underpinnings of the state as it does in political philosophy, or of the law as in legal philosophy, et cetera.
Alternatively, philosophy can be seen as a critical or even skeptical concern, stripping away the beliefs we have until we get to bedrock, upon which we can stand with rational self-respect, and from which we can do the building that I spoke of above. Indeed, before philosophy can be a handmaiden, it must strip off the accretion of unjustified beliefs; to do this it has to shake a student up and challenge her. So, introductory and general philosophy classes have to be critical.
From a practical and pedagogical standpoint, you have to face students where they are. It just so happens—contrary to the picture painted by the cultural warriors—that most students are pretty complacent and convinced (if only because they have never thought about any of their positions) theists. And most of them in the United States are Christian.
When I face a class, I can—and do, for what it's worth—provide them with the tools to criticize atheism and agnosticism. But this is not challenging them, nor does it teach them that they have to earn their own beliefs and learn to enter into the space of reasons for themselves. After all, telling them that others have unjustified beliefs doesn't help them see why they should justify their own unless I show them to be in the same situation with regard to their own beliefs. (And I am not paid to teach apologetics.)
So, although I myself have the deepest respect for religious belief and don't count myself as an atheist nor even as a Humanist unless you mean the company of Erasmus and Nicholas Cusanus and Michel de Montaigne (no matter how often I get Humanist links on my blog), I am simply not doing my job unless I challenge my students' beliefs and them themselves, by making them face arguments uncongenial to Christianity or theism or even traditional morality. I am not supposed to be comforting them, after all. I have to make them read Hume and Nietzsche and other skeptics and doubters.
Now, I suppose we could have a higher (?) education system in which commonly held beliefs were never challenged and unreasoned and unreasonable faith was always celebrated. In fact, I believe the Taliban runs some schools of that sort. But, that won't keep murders from happening. It wasn't Nietzsche who opened fire, it was Kazmierczak. And, while I don't believe all ideas are harmless, it wasn't some poor sap teaching philosophy who put the idea in his head.
Posted by Tyler Hower at 3:37 PM

I never claimed that the influence of Nietzsche led to the killing spree. I did not commit the fallacy of false cause. I wrote: “If one reads The Antichrist will one become a killer? No, that doesn't follow. Could a Nietzschean philosophy support what happened at NIU a few days ago? I think so.” Upon re-reading this, I think it’s true. But it’s an entirely different claim than saying Kazmierczak’s reading of Nietzsche “caused” him to do what he did.

I teach Nietzsche to my college students, having them read various Nietzsche selections. I’m not worried that they will become killers as a result of their reading.

Could a Nietzschean philosophy support what happened? If all you mean by support is that it could give a rational justification to what happened, I think you are wrong in supposing it could if it were really Nietzsche--could someone think that his reading of Nietzsche supported it?, sure, just as people can think that their reading of the Old and New Testaments supports bombing bars in populated areas; Christ, after all, came not to bring peace, but the sword-- but in that case you are not claiming that it would have had a (direct) causal relationship to the shooting spree. It still seems that you are giving some causal power to the ideas you take the killer to perhaps have gleaned from Nietzsche; action causation is, of course, a terribly complicated matter, and it does seem that your worries about Nietzsche are only justified if you think his works could have some causal role in immoral and evil action. Otherwise, why the worry? (I am troubled with the number of counterfactuals floating around, but that is a more general problem with how ever to evaluate counterfactual claims.) So, insofar as I misrepresented or misunderstood your claim, I am in the wrong. But, if you are saying that Nietzsche does support killing sprees of the sort that took place at NIU, I will hold out for saying that you are just wrong about that. And, if you are saying merely that someone might interpret him to be supporting that, that is pretty close to a vacuous claim. People interpret texts and thinkers in all sorts of ways that are not in fact supported by the text. And, as someone who cares as deeply about Scripture as you do, surely you must agree with that.

Wishing you a blessed Holy Week,