According to a recent profile piece on Cindy McCain in The New Yorker—yeah, I read it; I'm elite that way; I read The New York Review of Books, too—while they attend her family's church in Phoenix, Senator McCain has not himself ever been baptized. According to the New Testament view and the traditional view of all Christian traditions, one becomes a Christian by baptism. This would mean that, if elected, McCain would be the first non-Christian—unless you exclude Unitarians—President of the United States. And you thought he was beholden to the Christian right.
Posted by Tyler Hower at 10:06 PM 9 comments:

One of my favorite signs 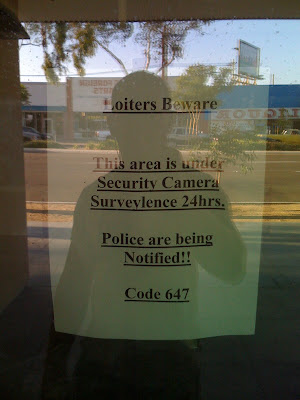 A few blocks from my house there is a condo development populated by retirees. Like many newer developments, the ground floor is set aside for commercial use. And, like almost every other such building in San Diego, the only businesses occupying any of the space are a Starbucks—one on the chopping block—and an H&R Block—open for four months every year. So, the majority of the ground floor is empty. Because empty buildings with some protection from the elements attract sleepy homeless people, the owners or managers of the building have posted the above sign. Enjoy the absolute refusal to accept any of the spelling suggestions that the word processing program certainly must have offered.
As a bonus, you almost get to see me as I walk Mateo.
Posted by Tyler Hower at 10:06 PM 4 comments:

I believe that abortion is seriously morally evil. And, I think that most people, most Americans for certain, believe that it is a morally questionable practice, though many often adopt something like a knee-jerk relativist “it’s wrong for me, but who am I to say?” reaction when the issue is raised. I know from my experience with students that this is more or less the way they react—in my experience with students in ethics classes, this is the more or less standard reaction from male students, while female students are more likely to think that there is a serious moral problem with it. And, as I have said before on this blog, I think that it is a shame that the Democratic Party has become so deeply wedded to the pro-choice side in the abortion debate.
However, with Thomas Aquinas, I do not think that legislating what is morally best is always what actually gives us the morally best outcome. If Roe were overturned tomorrow—and, no matter what side of the issue you are on, Roe is one of the most horribly argued decisions imaginable; the sections on the philosophical and religious tradition are just horrible—I know that there are many states, because of laws already on the books, that would immediately outlaw abortion, but I also know that many states, like California and New York, would make no such move. Or, I think that it is unlikely that they would do so. Recall that many states had very liberal abortion laws before the decision. My problem with pro-life politicians is that they package their opposition to abortion together with other policies that remove options for poor women who might end up single mothers. (To be fair, this is not the case with all pro-life activists, but it is with almost all pro-life politicians.)
At the same time that we hear that we need more conservative Justices so that Roe will be overturned, we hear that we need fewer social welfare programs, that we need to push people off of assistance and into work, that we need laws that are more favorable to business and less regulation, that we ought to tax health benefits, that pro-union laws ought to be repealed, that we ought to have vouchers that allow those who can to choose schools other than the poor inner-city schools that so badly serve the underclass, while ignoring the effects that these policies have real effects on the poor and, in particular, on those who might feel that they have no option other than to abort. At the same time, they advocate further cuts in any sex ed class that would actually discuss ways to prevent pregnancy in favor of abstinence—certainly a noble idea but not realistic in such a sexualized society given the failings of human nature. And, these same conservative Justices who are most likely to vote to overturn Roe tend to embrace a legal philosophy in which the government has no role in protecting individuals from business practices, in which the government more or less has nothing more than a very minimal role.
The right response seems to me to be that which was advocated by Hillary Clinton a few years ago—and for which she took a beating from the pro-choice activists—namely, that we ought to make abortion as rare as possible. That is, we ought to work on building a society in which no one feels pressure to abort, where raising the child, even on one’s own, seems like a viable option, where we praise those who work hard to raise their children rather than sneering at “welfare queens” or “unwed mothers” and where contraception is available—for even if one thinks that contraception is a moral evil, it is one of a very different order than abortion. This, I believe is the best way to reduce the number of abortions, better by far than to overturn Roe.
That is why, though it always pains me to do so, I will probably continue to vote Democratic, in spite of my opposition to abortion.
Posted by Tyler Hower at 10:40 AM 2 comments: 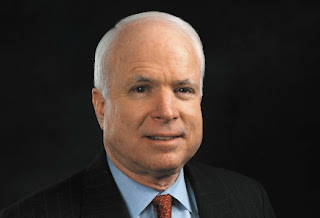 I just finished listening to McCain's acceptance of the GOP nomination and I must say that I always find his war heroism inspiring. In fact, I find his call for the need to subsume one's interests to a greater cause very compelling—though I am not sure that the nation is the right level—but I am at an utter loss as to the way in which the modern GOP (not the party of Lincoln or TR or even the Rockefellers) has ever asked any of its members to do anything more than look out for themselves. I can sometimes find McCain a compelling figure, but not in the version in which he has now had to rebrand himself.
Posted by Tyler Hower at 8:06 PM 4 comments:

...if Governor Palin gets to use her family and family experience as a qualification for the Vice Presidency, her family's flaws become fair game for criticism in the campaign. One cannot fairly have it both ways.
Posted by Tyler Hower at 8:15 PM 1 comment:

A point of rhetoric

In the recent discussions of Sarah Palin's youngest child and now of the pregnancy of her teenage daughter there have been numerous iterations of the "courage" of Palin in "choosing to have her child though he has Downs Syndrome—we will leave aside the deep insult that this is to people with Downs, many of whom I have counted as friends—and know of the "pride" that her family has in their daughter for "deciding" to keep the child. While this rhetoric may serve Palin and McCain well, it is utterly confused. Palin believes—or claims to—that abortion is immoral, it is the taking of an innocent life. We call the taking of an innocent life murder.
So, if Palin really believes what she claims to, her rhetoric and that of her supporters makes no sense. We don't speak of the courage of someone who doesn't commit murder when it might be more convenient so to do. We don't speak of pride in the non-murderer when they decide not to murder. It may be that she and her daughter are praiseworthy for doing what is morally required, some might say, in a society where many do not, but only exactly in the same way as one is when they refrain from any other immorality. It is not as if she has done the supererogatory.
Posted by Tyler Hower at 2:12 PM 3 comments: