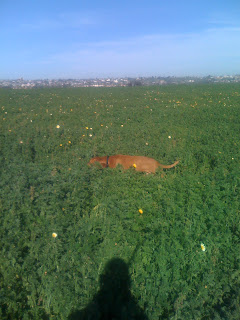 Yesterday was my birthday, or as I have been saying, my "half-death day". I figure that I have about 70 years in me and it was my 35th birthday, after all.
I spent it the way everyone should, helping students draw Venn diagrams, convincing thirty-some philosophy students that the problem of evil is almost intractable for a theist—and so making them think that I am almost surely an atheist—confusing one of my office neighbors who later saw me walking out of the chapel near my office—"Well you are full of surprises,"he said—shopping for jeans, increasing the size of my guns, taking the dog to Fiesta Island for a run through the short-lived greenery and going out to a really nice dinner with mi media naranja. All the while, thinking my life is really pretty good, interspersed with remembrances of that old song, "Is that all there is?"
Posted by Tyler Hower at 9:49 PM 1 comment:

So the highly principled GOP candidate, who stood up to the President, argued against torture—because of his own experience in the Hanoi Hilton—ridiculed Bob Jones University and the lunatic fringe of the Religious Right in his own party and told the American people that he is his own man has decided that, after all, the CIA shouldn't be restricted from torturing people suspected of having knowledge of terrorism, has accepted the endorsement of John Hagee, a man who blames all of my co-religionists for the Holocaust, calls Hitler a good Catholic and identifies Rome with the Whore of Babylon—in fairness, McCain offers the caveat that he doesn't necessarily endorse Hagee and wants to distance himself from Hagee's opinion if anyone finds them anti-Catholic—but why would anyone find them anti-Catholic, John—and basically offered every part of Bush's base exactly what it wants while gladly associating himself with all the glories of the Bush Presidency. He sure is his own man, if what you mean by being your own man is that you only care about yourself. He's starting to make Romney look consistent.
Posted by Tyler Hower at 9:40 PM 1 comment: