Now that I have your undivided attention

There's nothing new or revelatory in this realizati0n, but the modern American at least is culturally incapable of undivided attention. I suppose this dis-capacity is itself not a new thing, but at one time it was a private phenomenon and now it has become public, way too public.
When I was in college and the victim of a boring lecture--now I am the aggressor but once I was the innocent--I had few options other than paying attention. I could divert my mind through looking out the window at the visually numbing Indiana land- and weatherscape. I could doodle and write in my notebooks. I could daydream.
I could not talk to my friends; I would have been scolded and humiliated. I could not text my friends on my cellphone; cellphones were still the stuff of spy movies, Hart to Hart and the future; and, text had not yet made its debut. When push came to shove, I pretty much had to pay attention.
Not so, the modern collegian. While I was isolated from the world in a room in which Antigone was being discussed or truth-tables were being explained, the college student of today is never so isolated. In her pocket there is a device that silently, oh so silently, will allow her to keep in touch with her friends, roommates, paramours, relatives, even read her email and surf the web. And, so, without the isolation that students have always experienced when in the classroom, she has no impetus to actually pay attention. And not just in the classroom, but everywhere.
I suppose if I had a choice between listening to myself lecture and texting my friends I might get my thumbs working as well. I'm not sure that I'd do it through a choral concert, like the students in front of me in the University Chapel yesterday. I guess it's understandable, but that doesn't mean I'm not gonna get mad and explode at the next student who does it in my class.
Posted by Tyler Hower at 9:13 AM 4 comments: 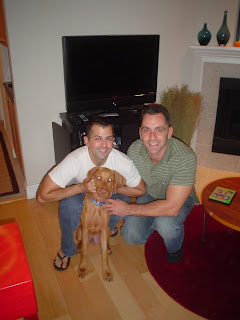 This picture is already a couple of weeks old, but it gives a little bit of an idea of just how big Mateo has gotten.
Posted by Tyler Hower at 4:34 PM 2 comments:

So, Mary Cheney is with child. While I am less than excited to see a eighth partial copy of Dick Cheney's DNA floating around, I am absolutely thrilled that Ms Cheney's hypocrisy continues unabashed.
Now, granted, Mary's pop didn't himself endorse Bush's failed, stalled or not-really-needed-once-the-election-was-won-and-the-evangelicals-were-superfluous Marriage Amendment, but Mary was quite happy to work assiduously for the re-election of Bush/Cheney as a high-level campaign staffer, even as that very campaign used gays and lesbians and the threat they supposedly pose to society and the family to get "values voters" to the polls.
Since then, Mary has said she had some qualms but after all there were other issues that she just was sure the incumbents were right about. I suppose that those were issues like protecting the financial interests of the wealthiest class, to which Cheney belongs, and in which issues like equal rights don't much matter. After all, no one is likely to claim that she is an unfit mother or call in protective services because she will be raising her child in a lesbian household.
Brava, Mary! Thanks for taking advantage of those rights and opportunities you worked so hard to keep from others.
Posted by Tyler Hower at 4:25 PM No comments: