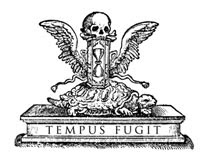 I am always hard-pressed to find situations in which philosophical reflection seems to have gotten things right—just ask my students or my partner how often I am able to provide a compelling argument in favor of a philosophical account—but one area in which it seems that a lot of different philosophers from different traditions and places and times have gotten things right is in their consideration of time.
While I was trying to motivate skepticism last week, a number of my students brought up the objection that at least they knew that they were a certain age or that they had lived a certain amount of time or something along those lines as evidence against the possibility of a Cartesian evil demon or a mass-simulation in which we all exist or a mere part of which we all are.
But, I countered, our experience of time, an experience that seems to have very little to do with the time of the physicists, is utterly subjective.
"Tell me, does this hour spent thinking about Descartes feel like the same amount of time as an hour hanging out with your friends? As you age, too," I said, "you will begin to see that decades can pass as if they were just a day or a few weeks."
In my own life this was brought home to me both by my realization that I have now lived in San Diego for five years and by a number of contacts by old, high school friends in the last week. I graduated from Huntington North (there was no Huntington South or East or West) almost 17 years ago.
But mostly it was made real to me by a note I received from my dearest college friend, a woman who in some ways played the role of a Beatrice for me, though I am no Dante. It seems like it was yesterday or at most a few weeks ago that I would sit on her sofa bed in the dorm that had once been mine, while she made me tea and talked about the intricacies of the Russian military rank system or interesting issues in paleography, or when we would walk around St Joseph's and St Mary's lake through the Indiana snow or across the way to St Mary's College, playing at being intellectuals and—I think, at least—in a kind of sweet and innocent love. She wrote to tell me of the return of a mass, not malignant, but life-altering nonetheless. And, I was reminded that so much time has passed and I tasted that bitter flavor of the long-ago and longed for past that the Greeks called nostalgia.
Posted by Tyler Hower at 2:00 PM

Hoenstly, I didn't understand a fucking word you wrote! :)

Call me dumb or call me smart, but when are you calling me to take you and Fernando out?