I don't understand CourtTV. I never have and I probably never will. Law and Order: Intensive Parking Unit has convinced people that the legal system is interesting in ways that it simply isn't. But whatever deep and important creepiness there is to John Mark Karr, why, oh why is Nancy Grace still covering him? Yes, he's a pedophile (though we don't yet know that he is more than a theoretical one), but he didn't kill JonBenet--pretty much anyone (who is not currently a District Attorney in Boulder) could have figured that out without flying him to the US--we aren't sure how much else he did other than possessing and trading in child porn (and, yes, that is truly horrible) and failing to show up for court appearances. It just isn't that interesting. I almost want to commit a crime just so Nancy Grace can get exercised about something interesting.
Posted by Tyler Hower at 10:36 PM 3 comments:

He's growing and the ladies love him 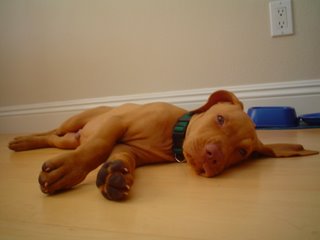 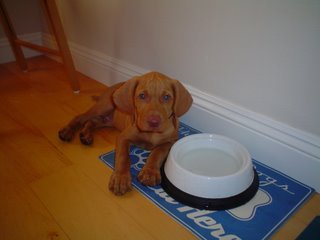 By local, you mean the Republican party?

In his "Wow, look at how great we've done with restoring the Gulf Coast and New Orleans" speech this week, el presidente took special note of the resurrection of the schools in New Orleans. He pointed out the presence of charter schools in NO--without mentioning recent studies that appear to show that charter schools do no better but perhaps worse than old-fashioned public schools while removing education from at least some of the traditional oversight.
This was part of his point about the schools in NO, namely that we need more local control in education. In some respects I am sympathetic with the idea behind local control of resources, though I am suspicious of local control of some aspects of education--it's just such local control that causes Kansas' science curriculum to change every election cycle, as the state school board goes from fundamentalist to rationalist and back again.
But, for Bush to call for more local control of schools is laughable. This isn't the Reagan presidency, with its promise of doing away with or at least eviscerating the Department of Education. This is the President of No Child Left Behind, one of the biggest unfunded mandates of recent memory, a program that tells the states that they have to institute more testing, more remedial programs and that they have to pay for it themselves.
Local control? Actually, a lot more centralization. Mentioning local control might please those in his base in favor of parochial and other private schools but, apart from voucher programs there has been a lot more centralization of education policy in Washington.
And, now, his Department of Education wants to do for higher education what it did for elementary and secondary schools, mandatory standardized testing (pretty much unworkable in any case, unless it tests only the most basic, i.e., high-school level, parts of the education)--to replace the local control we now have through faculty, boards of directors and regents, legislatures (in some cases) and the ability of students to vote with their dollars.
It used to be that the GOP was the party of less government. It was pretty much the only thing that was appealing about it. Bush has shown his ability to resuscitate that libertarian rhetoric, but there's nothing local in the kind of control his policies have instituted.
Posted by Tyler Hower at 5:57 PM 2 comments:

Maybe if they were all wealthy, white beauty queens

How many children died in this week? (How many around the world? How many were raped? How many forced into prostitution or war? How many infected with HIV?) And, given that, why is JonBenet Ramsey once again so important that CNN, FOX News(?) and all the major networks go into orgasmic spasms about an insane man who claims to have killed her (but about whom we apparently know little more than he is a pedophile who may not even have been in Boulder at the relevant time)? 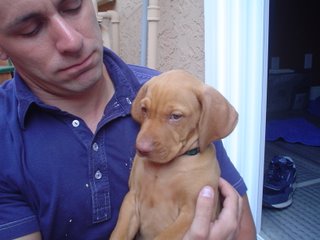 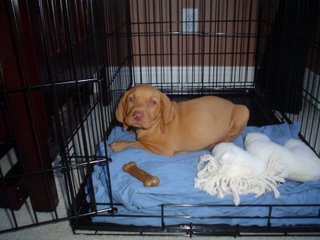 On Monday, we drove to Ramona and picked out and picked up our new puppy. He's a 7.5 week old Vizsla, named Mateo. It turns out that he's a really good howler and is also getting a pretty good handle on barking--I've been sleeping in the room with his crate, well, not sleeping, actually--but he's also pretty smart. And, he's too damned cute.
Posted by Tyler Hower at 12:51 PM 5 comments: