The Father of Lies: Evil, the Devil, and Us 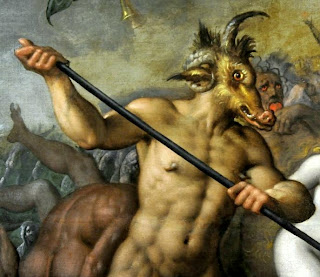 There’s a line you hear from traditional Christians quite often. They will tell you the Devil is real. And, that when you say he isn’t that’s exactly what he wants, because he wants you not to fear him, not to be on guard against the lion that walks about waiting to devour the believer. And, when you aren’t on guard, that is when evil can triumph.
To deny the real existence of the Devil as a being is still a heresy for most Christians. His existence is affirmed in the catechisms of the Catholic and many other Churches.
There’s something a little brilliant about the notion of the Devil. To see a being like the Devil is to affirm that there is real evil in the world. This is not something that every tradition has seen. Many religions have some shady gods or demigods or spirits—Loki or Hades or Coyote or the Tempter or Opposer (haShatan) or many others—but they aren’t purely evil. And, often they exist in worlds where there’s not much notion of evil.
It can be hard to see from our point of view, but the notion of evil has not been and isn’t universal. When you read Homer, you see enemies, but they are no more evil than the gods are good. Hector is Achilles’ enemy, and he hates him for killing Patroclus, but he isn’t evil. There is no moral judgment of the sort that could make that distinction. Even when we come to a figure like Socrates, he cannot conceive that someone could see something as bad and yet choose it.
The discovery of real evil is an advance in thinking about humanity. Whatever Nietzsche may say about how we should feel about birds of prey, it is good to recognize we live in a world—yes, of mostly grays—but in which the full negation of good has a place. In this sense, then, the Devil is an advance in understanding the world.
But that advance comes at a cost in terms of our own self-understanding. The Devil is both a recognition that there is evil and a placing of that evil outside ourselves. It isn’t humans that are evil; they are led astray, tempted, suggested to, by an outside evil force.
There is a danger in giving up the Devil—maybe a greater danger than that of giving up God. The danger is that we lose sight of evil. And, this happens in some of the more shallow presentations and lazy acceptances of relativism.
“What they do over there, or what we used to do here or [less often] what we currently do isn’t evil,” we are tempted to say. “It’s just the way we do things.”
That is a mistake.
But, there’s an equal danger in hypostasizing or reifying that evil into an external being, a Devil. If we are seriously self-reflective and, sometimes I am too seriously self-reflective, we all recognize that there are dark places in us, spots of evil. Some of us have more and some of us have less; some of us can control them better, some of us worse; some of us barely see them, some of us are aware of them all of the time. But, they are there. Inside us.
Denying the wisdom the idea of the Devil represents may well lead us to forget the real evil that is around us, but believing in the Devil is as likely to make us oblivious to the evil within.
The world would be easier if there were no evil, and life would be easier if the source of evil were outside us. But neither the world nor life are easy.
Posted by Tyler Hower at 4:34 PM