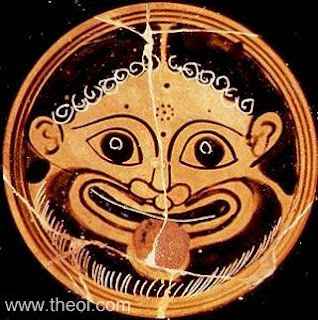 I was reading someone's profile somewhere online this week and I read through his selection of quotes and inspirational sayings. I almost always drudge through this part of an online profile, only because I find it interesting to see in what way people want other people to view them—I don't take too seriously the idea that people actually guide their own lives by the quotes and ideas they select; I assume rather that they are portraying an ideal self or at least a self that they want others to see, even if they don't want to become that self—and because I like to see the list of quotes that are misattributed and not even in keeping with what the supposed quoted actually thought. Among those most often misquoted are Socrates, Plato, Nietzsche, the Buddha and a handful of recognizably great but sufficiently foreign characters to whom anything plausibly, it seems, can be credited.
The thought that caught my idea this particular day was something to the following effect: The ancient Greeks asked only one question when a man died, "Did he live with passion?"
Now, I understand the idea here. This fellow thinks or wants us to think that he thinks that a life that isn't filled with passion is a value-less life. All well and good. But, as someone who has worried a lot both about the ancient Greeks and the passions, I'd love to know which of the ancient Greeks thought this. The Homeric ones, the Platonists, the Aristotelians, the Spartans, the dramatists, the Hellenists? Sure, it must seem that I'm being pedantic and bitchy, but there's actually a serious problem here. Or, there might be a couple.
In contemporary society, to be passionate about something is often thought to be a good thing. It is to be deeply committed to it, to feel a deep emotional attachment that drives one on in ones pursuit of that thing or idea or whatever. This is, however, a very modern conception, probably tied to something like Kierkegaard's nineteenth-century distinction between objective and subjective truth. Most of the Greeks about whom we know felt pretty differently about passion. "Passion" comes from the same word that gives us "pathetic", a base word that means to suffer. This is why Christians talk about the Passion of Christ—it is His suffering that is being discussed, not His dedication. So, for the Greeks, to be passionate was to be suffering an emotion. And, for pretty much all of the Greeks, suffering was a bad thing, except in those cases where it was necessary to suffer some evil to prevent some other evil. One would never willingly choose to live a life where one was the constant victim of passions, where one was constantly driven by forces beyond ones control.
Think of the way that even we conceptualize passionate love as something that one is in the throes of, something in which one might lose herself, etc. These are not the sorts of things the Greeks, so far as we know, valued. They generally seem to have thought that the emotions were something that should be kept in check and that very bad things happened when they were not; the dramatic canon is partly about what happens when the emotions aren't controlled.
Am I saying that the Greeks were right about this? No. Do I think they largely were? Yes, but that's not my point here.
Instead, I think using this kind of spurious account of the ancients or quote of an ancient sage demonstrates two important problems in thought, even as it avoids a third.
1)A belief that whatever we think about life can only be right if we are able to find some ancient forebear who believes exactly the same thing. This is just simply wrongheaded. I think that we have a lot to learn from the past. In fact, I think that much of what is wrong in the world is partially a result of not seriously considering the wisdom of those who have gone before. However, the past might just be wrong. And, when it is, or when we believe it is, we ought to accept that we disagree with the ancient Greeks or with the Buddha or with whomever. (I'm sort of a Stoic and sort of an Aristotelian, but I disagree with both schools in numerous ways.) If we really thought that everything there was to say of interest had been said in the past, then we should all just be historians.
2) A belief that those who lived in the past were exactly like us in every respect. Thus, they would feel as we do about the passions. But, the ancient Greeks lived in a society (or a set of societies) that were more warlike, much smaller, often slave-holding, agrarian, etc., etc. They were alike us in that they were humans, in that we can understand them, we can make sense of them, they can speak to us—we should avoid the other extreme of saying that they were so much unlike us that we can never understand them—but they weren't us, even if we do agree with what they say.
So, when we're looking for the past to underwrite what we believe, we owe it to the past and to ourselves to get the past right and to understand whether they could even have been worried about what gets us so worked up.
PS Many of the ancient Greeks do seem to have thought that there was only one question relevant at the end of a life. But that question was: Was his life a happy life? Some other day, we can worry about what they meant by happiness, because it wasn't our happiness, either
Posted by Tyler Hower at 11:29 AM

"If we really thought that everything there was to say of interest had been said in the past, then we should all just be historians."

Never knew that passion, well at least in today's sense, was a newer concept. great read.

Some of the denotation is the same, but the connotations are very different.

And, for some reason, I am now thinking of that horrible/excellent NBC soap opera, Passions!

I enjoyed this post. I think people have a tendency to put Greek culture and or ancient Oriental culture on a pedestal. Often in a way that misrepresents/misunderstands what they really meant or what they were really about. These thinkers are often accorded to much authority with too little scrutiny. Like you say, we have to precise about the terms and put everything in context. We can't just 'read-in' things that we want to hear, 'oh the Greeks said it, that validates how I feel/think', I must be on to something...'