On forms of the common life 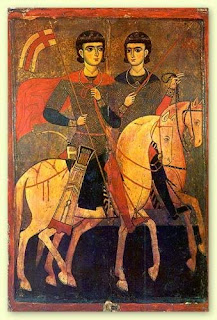 The state's Supreme Court has ruled that California's ban on same-sex marriage is contrary to the state's constitution. What this means is that in about thirty days, city halls within California will begin to issue marriage licenses to same-sex couples.
It also means, predictably, that conservatives of all stripes will be more motivated than normal to vote for the referendum already on the November ballot to amend the state's constitution. I'm not sure about the most recent referendum, but some of the most recent attempts have also sought to overturn California's current system of domestic partnership.
In California, domestic partnership is an almost marriage. It gives you most of the legal and (state-based) tax rights and responsibilities, without calling it marriage. Because I am a pessimist most of the time, I fear that we will end up not just without marriage but also without domestic partnership, an arrangement that was also to the benefit of older couples who may not have wanted to lose federal benefits by remarrying.
I am perfectly happy as a domestic partner; I think it perfectly well describes and fits the relationship I am in (and have been for the last 11.5 years), one in which no one is a husband or a wife, where two people are united in a home and a life and a life project, where two people have made a common life, but which is not much like a traditional marriage, and I think that I will probably end up losing that relationship either through referenda or through being made to marry.
I just heard on the radio that San Diego's gay and lesbian community was celebrating the decision. Some of us are not as sanguine.
Posted by Tyler Hower at 7:02 AM

I am sanguine knowing California is a community property state.

Now on to your concerns. I also believe the religious right will be out canvassing neighborhoods but at the same time, and knowing this years turnout will be the largest in history, we have need a coalition of Arnie republicans, dems, and indy's. It will be a test to see how far we come and unlike the last Proposition whether we have competent campaign Advisors.

You do address my practical concerns, but not my theoretical ones. I'm not sure that you are right about the practical ones. The referenda have never gone in our favor; most of the state is east of the relatively liberal or libertarian coastal cities. I'll be posting more on this, but in general, I think marriage is the wrong model, because of its historical and conceptual baggage.

Anonymous said...
This comment has been removed by the author.
11:20 PM

I didn't think I made a statement which woould be considered right or wrong, but you do have this tenacity to make it a point to mention that I am wrong about something :)

I did mention supra the coalition that will be needed to get this proposition defeated, and I don't care if its 50.7 % against, as long as it loses. I do think public opinion among independents and moderates against gay marriage is and has been eviscerating - although I can't cite any recent opinion polls but I know I have seen them somewhere. I generally believe the longer people think about the issue and think about the arguments for and against rather some superficial emotional response on the fly like the previous proposition was about - we will win over more supporters. If the language of the current Proposition is extreme (like in Arizona I believe), which I am also not sure about, I am much more confident then you for some reason that the Prop will get soundly defeated.

But you are right about rural california. Today at a site inspection in Little Italy, I had lunch with one of our experts who declared his opposition strictly NOT on religious grounds but under some theory of maintaining "tradition" - then mentioned where does marriage rights end (meaning the full use and application of the word "marriage"), if you expand on it further? So he's conservative but not religious conservative. Those are the people the new campaign must educate and inform that passing marriage rights to gay couples does not necessiate that marrying your cousin follows. That there are, and should be, limits simply for practical reasons, marriage between a man and a woman and marriage between same sex and that is ALL!

How would you answer this "plumbing expert's" concerns or fears?

For what it is worth, you may marry your first cousin under certain circumstances in California, though not in my home state. This man sounds like what a conservative actually is, someone who thinks that other things being equal, the way things are done ought to remain the same. Conservative used to mean someone who maintains the status quo, not because it is best, but because it is better to stick with the devil one knows than to invite the demons of unintended consequences. I would have answered his concerns by instead pushing for an expansion of domestic partnership and had a two-tiered system, where the only difference would have been in name. But that ship has sailed.